When people said they’d have a bright future, they weren’t kidding.

Seth and Stephanie Schramm established Schramm Electric in 2008. In the beginning, they ran the company out of their home while keeping their regular jobs. Seth went full-time first once the business got off the ground and Stephanie followed a year later. In February, 2013 they opened the Schramm Electric office on Lakeport Avenue. With continued growth and a need for more space in May, 2014 Schramm Electric transitioned into a new office and warehouse on Line Drive.

Today the ambitious young company has a staff of full-time electricians and is wired into some of the biggest jobs in town. Their reputation for solid relationships, quality customer service and deep knowledge of the industry keeps clients coming back and continually builds new ones.

Seth: With nearly 15 years of expertise as an electrician, Seth is a full service Certified Master Electrician with licenses in Iowa, Nebraska and South Dakota. Seth is a military veteran, a hockey fan and the owner of Schramm Electric.

Stephanie: Stephanie holds a degree in business from Iowa State and works hard to keep Schramm Electric organized and efficient. She’s the friendly voice answering the phone and the person who stays on top of every job. Stephanie is a proud hockey mom and helps run Schramm Electric with her husband Seth. 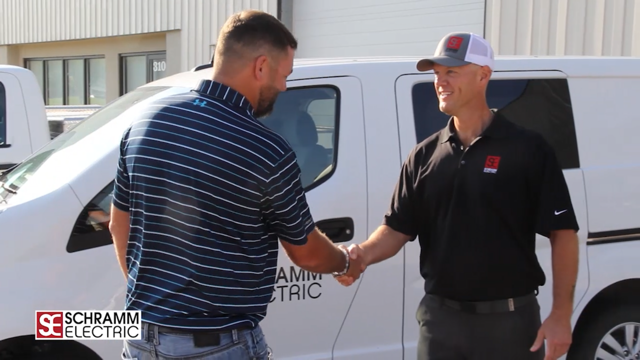 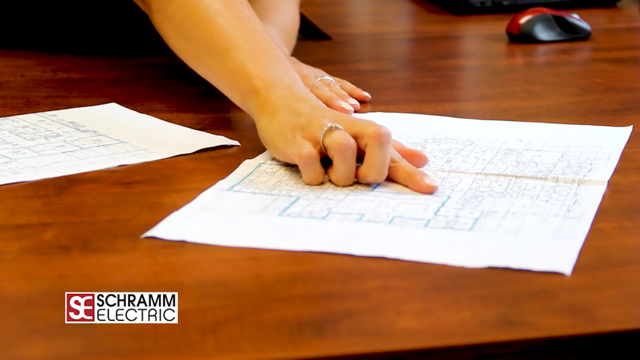 Professional
Our Electricians Know How To Conduct Themselves.

Whether the job is commercial, industrial or residential, the professional electricians at Schramm Electric are always respectful, honest and dedicated to getting your job done on budget and on time. You can count on us to keep the job site clean and organized and to always conduct ourselves in a professional manner. We take great pride in a job well done.

Reliable
Once We're On, We're Always On.

As a client of Schramm Electric, we provide you with amazing service before, during and after the work is done. Service after the sale is a huge benefit to Schramm Electric customers—we stand by our work. Period.

Safe
We Don't Just Follow Code. We Live It.

The professionals at Schramm Electric are licensed in three states—Iowa, Nebraska and South Dakota--and we comply with all state codes and regulations. Our electricians uphold the highest in quality and safety standards. We don’t just keep ourselves safe, we ensure the safety of our customers by surpassing safety standards. Schramm Electric is also an IBEW affiliated contractor with the Local 231 in Sioux City, IA.

Fair
We Keep Prices Low And Your Expectations High.

Fair market pricing is a big deal. Our hourly rate is competitive and we keep our materials cost as low as possible. When we bid your project, we bid it with cost-efficiencies in mind, no matter what your budget. Basically, we treat each project as if we were doing it for ourselves. What’s the smartest way to approach the project? Are there innovative solutions? More affordable materials?

Seth was first exposed to basic electrical circuitry and components in the US Navy working on board naval ships. Upon completion of active duty, he entered the five-year electrical apprenticeship to learn the trade. Looking to further his skill set, he was chosen as an electrical project manager for a large beef processing facility overseeing continuous upgrades at three facilities working with numerous electrical contractors and hundreds of electricians on various projects.

He saw the need for a local electrical contractor with the ability to oversee projects with the customer’s goals in mind and a commitment to providing projects on time, on budget and up to code.

Seth’s wife, a business major from Iowa State, was pregnant with their third son and together they started laying the foundation of what would become Schramm Electric. Starting with obtaining their licenses, registering with State and local municipalities, insurance and bonding. They started very small, a used minivan & basic tools.

The past ten years have been exciting and rewarding to Schramm Electric, now with multiple employees, service vehicles, equipment, and a new office they are further solidifying their relationships and commitment to their customers.

We’re proud to have worked with these leading companies and provide them with quality, professional service for their electrical needs.

“Thank you to you and your staff for such a quick response to our need last night. This is not the first time we’ve called and every time we have, your customer service has been outstanding. Schramm Electric was a tremendous asset to KTIV last night and we thank you for being so wonderful to work with.“
-Bridget Breen, Director of News & Operations
"You did an awesome job for us!! Thanks for being so prompt, efficient & affordable! We are telling all our friends about you! Much appreciated!"
-Mike & LeAnn Hansen
Seth Thank you so much for your prompt & professional service. It was great to work with you. Keep up the great service and you will be very successful!
-Steve Jewett, Sloan Glass Service
Thanks for the fast response time in getting out to the transmitter site yesterday morning! Your dedication, knowledge and skill make you the best in the business!!!! Sorry to both you and Stephanie for waking you at that time of the morning. Again thanks from Bridget, Dick, myself and all of KTIV News 4.
-Vince Welch, Engineer KTIV/The CW Siouxland
Thank-you Nice job! Will refer others to you. Nice talking with you Seth. You are a nice young man.
-Vicki B.
Schramm Electric company and their employees have worked in many of the sub ops yards and control houses. Their installations speak for themselves, the work is done in a professional manner and installations are top notch.
-John Neiman Jr., Substation Supervisor, MidAmerican Energy Company
“Just wanted to write a short thank you for your service the times you have been to the house. I have always been very pleased with the work that has been done and the friendliness and professionalism with everyone. I would definitely recommend and call on you for future needs."
Tammy W.
“It is so beautiful to have young people, like you, on Earth! – and also to have family owned businesses who have Christian values. I have felt such trust in your business since the first time we discussed the electrical work needed in my home, the quality and expertise of the work, initially, by you and the jobs Jeff has done since then. I always recommend your business!"
Cheryl B.
Previous
Next

Learn more about Schramm Electric, our projects, clients and culture.

This month we are celebrating 10 years of being in business! 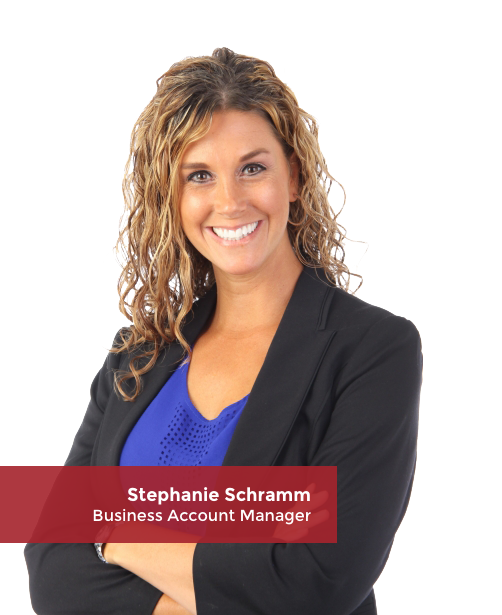 Get in touch with us today to talk about your next project or current electrical needs. We’d be happy to provide a free consultation for your business or home.